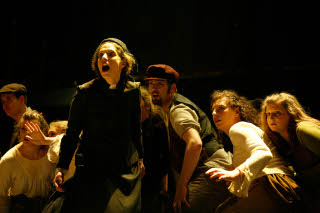 In 2005 I joined the FME, an amateur musical company in Münster. So far I have participated in two productions: Jekyll&Hyde in 2005 and Frankenstein in 2007. (Quizquestion#3: Mary Shelley, who wrote Frankenstein in 1816, was a friend of an English poet who was descibed by a female admirer to be "mad, bad and dangerous to know". Who was that poet?")

Since working in that group on and behind the stage has become such an important part of my life, so I decided to put some pictures and information on this site to let you know what it's all about and why it fascinates me so much.

I rewrote the lyrics of "Er kennt mich nicht", one of the Frankenstein songs, as a kind of farewell song which I performed (poorly, I am afraid) at the party after the last show. It has a tiny bit of a Titanic song mixed into it as well, because Titanic was a musical which we almost did and I am still sad that it did not work out.

So, was there a life before FME? Is suppose so, but it must have been utterly boring ;)